Significance: During the eras when American labor unions were most powerful, themajority of immigrants to the United States were members of the working class, and many immigrants played major roles in labor organizations. Many immigrants have joined national, industry-based unions; others have created race-specific labor unions. Historically, the racial heterogeneity of the American labor force has been a source of both conflict and solidarity. 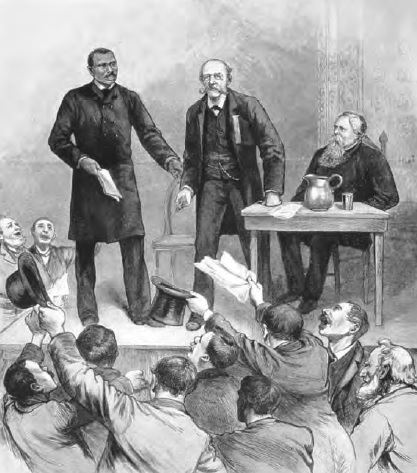 Cover of an 1886 magazine depicting a convention of the Knights of Labor in Richmond, Virginia. (The Granger Collection, New York)

Since the end of the U.S. Civil War in 1865, an incredibly diverse mix of races has taken part in the labor movement that has helped to shape the United States. During the Reconstruction era after the war, emancipated African American slaves and their descendants joined the ranks of agricultural and industrial laborers. Meanwhile, the numbers of immigrants flooding into the United States was rising to unprecedented levels. From the last decades of the nineteenth century until 1924, more than 25 million new immigrants, primarily from Asia and Europe, poured into the nation in response to the call for laborers to fill positions in expanding factories, mines, and mills. The later decades of the twentieth century saw even more immigrant laborers join those previous arrivals, but most of these immigrants were from other parts of the world, primarily Mexico, the West Indies, Central and South America, Pacific Rim nations, and South Asia.

Heterogeneity in the American Labor Force

Cultural and racial heterogeneity has long been the unique hallmark of laborers in the United States, but this very diversity has had both negative and positive consequences for the American labor movement as a whole. Individual immigrant groups have sometimes asserted their racial identities in their struggles for recognition in the American working class. This tendency has generated conflicts among workers from different immigrant groups. Many employers, seeking to marginalize their employees to keep wages down, have inflamed those racial tensions to reduce their employees’ ability to organize.

At the same time, however, racial and ethnic identification can be a powerful mobilizing force. Immigrant laborers have sometimes realized that their commonality of work experience can bridge their unique cultural understandings, creating points of mobilization for protection and advancement. Both the tendency toward interracial conflict and the tendency toward racial solidarity have coexisted within some of the key national American labor unions, and the ebb and flow of those tendencies have affected their immigrant membership even into the early twenty-first century.

Knights of Labor, the AFL, and the CIO

The Noble Order of the Knights of Labor (KOL) was organized in 1869 with the goal of uniting all those who worked for wages into a single, huge national union that would produce and distribute goods on a cooperative basis. Recognizing the need for broad-based labor solidarity to achieve this goal, the Knights of Labor offered membership to men and women of all races.

Through the 1870’s and 1880’s, KOL leader Terence Powderly traveled throughout the United States to recruit members. His campaign was successful to the extent that he helped establish more than thirty cooperative enterprises. Peak membership in the KOL included about 70,000 African American workers and 40,000 Asians and Europeans. The organization’s multiethnic solidarity helped to improve the conditions of Missouri Pacific Railroad workers in 1885. KOL-led work stoppages ultimately forced railroad mogul Jay Gould to restore the wages he had cut the previous year, and he begrudgingly recognized his employees’ union.

Formed in 1886 to organize craft unions encompassing laborers in specific trades, the American Federation of Labor (AFL) was much more racially restrictive and divisive than the Knights of Labor. In his own membership recruitment campaigns, AFL leader Samuel Gompers appealed only to the elite male members of the working class—the most skilled workers. During the late nineteenth century, few members of minority groups fit that description, and even those who did were excluded frommembership. Although Gompers himself was an immigrant fromEngland, he believed that if the AFL allowed members of certain immigrant groups to join, the federation would become caught up in racial controversy. Convinced that his organization had more imperative and concrete issues on its agenda, he avoided racial entanglements by simply prohibiting minority workers from joining the AFL.

The AFL’s "aristocracy of labor” continued to deny membership to unskilled and semiskilled immigrant labor through the 1930’s. Persistent racist and nativist ideologies led many AFL leaders to see immigrant groups as individual nationalities whose differences were potentially subversive to the American labor movement, rather than as potentially valuable allies in the advancement of labor’s interests.

In 1935, John L. Lewis and seven other top AFL leaders broke from the AFL to form the Congress of Industrial Organizations (CIO). These men believed that their new union would make itself strongest by welcoming semiskilled and unskilled workers of all races, who had been ignored by the AFL. The CIO made good use of the more than 1.8 million workers whom it brought under its umbrella. In 1937, successful sitdown strikes against General Motors, Chrysler, and U.S. Steel won the CIO recognition as the bargaining agent for millions of workers previously regarded as unorganizable.

Even before the CIO split from the AFL in 1935, labor organizer A. Philip Randolph had organized the many African Americans working on the nation’s passenger railroads into a powerful union. His Brotherhood of Sleeping Car Porters won significant concessions from the Pullman Company during the 1930’s and later provided a solid base from which black workers could challenge racial discrimination on a variety of fronts. In 1941, his union helped persuade President Franklin D. Roosevelt to issue an executive order forbidding employment discrimination by defense contractors. Seven years later, Randolph and his union helped persuade President Harry S. Truman to issue an order outlawing racial segregation in the American armed forces.

During the 1960’s, African Americans began working to extend connections between labor activism and civil rights. They began at the local level with strikes by sanitation workers in Memphis, Tennessee, and hospital workers in Charleston, South Carolina. Undertaken by previously unorganized, heavily exploited, poverty-wage workers, these actions for higher wages and safer working conditions gained the attention and support of larger national industrial unions, including the United Auto Workers and the United Steelworkers. However, despite the success of the individual strikes, white workers have supported African American labor actions only halfheartedly, reflecting the continued divide between race relations and workingclass solidarity.

Responding to the demand for manual laborers after the United States entered World War II, the United States and Mexico instituted the bracero program in 1942. Thousands of impoverished Mexicans, lured by higher wages, headed north to thin sugar beets, pick cotton, and weed and harvest cucumbers, tomatoes, and other crops on American farms. As experienced farmlaborers, the more than 350,000 braceros who crossed the border annually helped to develop North American agriculture. The bracero program contract between the United States and Mexico was ended in 1964, pressured by Latino labor activist César Chávez’s description of the program as "legalized slavery.”

The son of migrant farmworkers, Chávez helped to raise awareness of the plight of braceros and other agricultural workers, and became the head of the United Farm Workers union (UFW) after it formed in 1965. Until his death in 1993, he used strikes and national boycotts against fruit- and vegetable-raising agribusinesses to win wage and working conditions concessions for mostly migrant agricultural laborers. TheUFWlater became an independent affiliate of the AFL-CIO and helped win passage of a California law recognizing the right of farmworkers to engage in collective bargaining. By the 1980’s, about 45,000 farmworkers labored under the protection of UFW contracts, and the union was bargaining on behalf of farmworkers in states across the country.

The majority of farmworkers who have benefitted from UFW labor organizing have been Mexican Americans and Mexicans. Workers from other Hispanic groups, particularly Puerto Ricans and Cubans, have found representation in another major union that protects such service employees as janitors, nursing home aides, hospital aides, security guards, and building service maintenance. Although the membership of the Service Employees International Union (SEIU) is largely Hispanic, the union itself is not a race-specific organization. It merely happens that the majority of public service sector jobs are filled by Hispanic workers, many of whom are foreign immigrants. The SEIU has united more than 1.5 million workers and has become the North American union with the largest number of immigrant members.

To an extent that may have been greater than that experienced by any other ethnic group, Asian immigrants have historically been excluded from American labor organizations. This has been true even though Asian immigrants have worked in some of the most dangerous occupations that laborers have faced. For example, the early mining industry in the Far West was one of the first to employ the Chinese, who dug for gold, hauled coal, and worked with explosives. Chinese immigrants also helped to build the railroad lines that connected theWest to eastern markets and did some of the most dangerous work with explosives to excavate tunnels. Japanese immigrants also worked on the railroads, first in construction, and later as porters and foremen.

Despite the difficult and often dangerous work that Chinese and Japanese laborers performed, these immigrants were resented and badly treated by native-born American workers and employers. State laws were passed to limit their rights, and federal laws were enacted to limit further Asian immigration. Asian workers responded by organizing at the community level and embracing wider cultural and racial demands for justice and dignity. They also formed their own race-based unions.

Since the early 1990’s, one of the most active Asian unions has been the Asian Pacific American Labor Alliance (APALA). This organization was founded in 1992 to address the special needs of Asian and Pacific Islander garment factory workers, hotel and restaurant workers, longshoremen, nurses, and supermarket workers, and to connect those local alliances to the national American labor movement. The APALA has actively promoted the formation of AFL-CIO legislation to create jobs, ensure national health insurance, and reform labor law. It has also supported national governmental action to prevent workplace discrimination against immigrant laborers and to prosecute perpetrators of racially motivated crimes.

The successful creation of race-specific labor unions and the inclusion of immigrant groups in the larger project that is the American labor movement have not resolved the debate about the role of immigrant and minority workers in American labor. However, these developments have helped ensure a continuing discussion about issues that have captured the attention of labor organizers since the late nineteenth century—higher wages, safer working conditions, increased respect—and have raised awareness of the importance of immigrant groups toward realizing those goals for all workers.

Briggs, Vernon M. Immigration and American Unionism. Ithaca, N.Y.: Cornell University Press, 2001. Evaluates the effects that immigration has had on union membership throughout American history and adds to the current debate about how industries should deal with documented and undocumented immigrant workers.