Czechs were among the earliest eastern European peoples to immigrate to North America, first coming in large numbers to the United States in the 1850s. In the U.S. Census of 2000 and the Canadian census of 2001, 1,703,930 Americans and 274,740 Canadians claimed Czech or Czechoslovakian descent. Although Czechs were widely spread in agricultural areas of the United States, they had large enclaves in Chicago, Illinois; Cleveland, Ohio; and New York City. Czechs are dispersed throughout Canada, with significant concentrations in Toronto, Montreal, Vancouver, and Winnipeg. 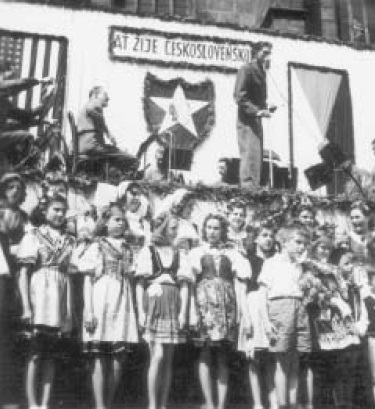 Czech children in front of a bandstand. More than 12,000 Czech refugees were admitted to Canada following the Soviet occupation of 1968 and a similar number to the United States. (George Shultz Collection/Double Delta Industries, Inc.)

The Czech Republic occupies 30,300 square miles of eastern central Europe between 48 and 51 degrees north latitude. Poland lies to the north and to the east; Slovakia to the southeast; Austria, to the south; and Germany, to the north and west. The land is hilly with a plateau surrounded by mountains in the west. In 2002, the population was estimated at 10,264,212. Ethnic Czechs comprise 94 percent of the population, and the closely related Slovaks make up 3 percent. The population is divided mainly between atheists and Roman Catholics, each group reaching about 40 percent. The Czech regions of Bohemia and Moravia were part of the Moravian Empire, the Holy Roman Empire, and the Austro-Hungarian Empire prior to the proclamation of the republic of Czechoslovakia in 1918. Heavy population pressure during the 19th century and a failed nationalist revolution in 1848 led an increasing number of Czechs to seek their fortunes outside the country. From the 14th century, the Czech city of Prague was in many ways the cultural center of eastern Europe. In 1938, Czechoslovakia was partitioned. After agreements with Britain and France, Nazi Germany under Adolf Hitler occupied the westernmost portion of Czechoslovakia, known as the Sudetenland. Russian and Czech troops began to liberate Czechoslovakia in 1944, freeing Prague in 1945. Under Soviet pressure, a Communist prime minister was chosen, and by 1948, the government was fully under Communist control. A serious move toward liberalization began in 1968 when the Stalinist ruler was deposed. A series of liberal leaders attempted democratic reforms but were ousted by troops from the Soviet Union, Poland, East Germany, Hungary, and Bulgaria. The invasion caused some 40,000 refugees to flee the country, which was returned to a more orthodox communist rule. In 1989, tens of thousands of protesters demanding free elections took to the streets of Prague, where a violent police crackdown occurred. Communist rulers stepped down, and a popular regime took control. Following peaceful negotiations in 1992, Slovakia declared its independence and separated from what was renamed the Czech Republic. The Czech Republic joined the North Atlantic Treaty Organization in 1999 and the European Union in 2004.

The westernmost of the Slavic peoples of Europe, Czechs from the Austrian Empire followed much the same pattern of settlement in North America as did southern Germans, though few immigrated during the colonial period. The first significant immigration followed the abortive revolutions of 1848. By 1860, there were already more than 10,000 Czechs in the United States, many of them having migrated to Chicago; St. Louis, Missouri; and Cleveland. Others, arriving as family units, usually chose, before 1880, to farm in the Mississippi valley, Nebraska, Kansas, and Texas. After 1880, Czech immigrants increasingly found work in mines and steel mills, and most stayed to raise families in the United States. By 1900, more than 56 percent of Czech Americans were born in the New World. By World War I (1914–18), some 350,000 Czechs had immigrated to the United States, with Illinois being the most favored state of settlement, and Chicago and Cleveland, the leading centers of Czech culture. With the restrictive Johnson-Reed Act of 1924, Czech immigration declined until the Nazi occupation, which brought some 20,000 additional immigrants to the United States. With Communists gaining control of the Czech government after World War II, the United States opened its doors to Czech refugees as a part of its cold war commitment. Between 1946 and 1975, more than 27,000 Czechs were admitted. With increasing political opposition to the Communist Party during the 1980s, the number of refugee claims rose significantly. Between 1983 and 1989, more than 7,000 Czechoslovak refugees were admitted. The Czech Republic has recognized personal freedoms since its independence in 1989. As a result, the number of immigrants has declined dramatically to about 1,000 per year between 1992 and 2002.

Czech immigration to Canada developed more slowly. The first significant migration came after 1880, when a small number of Czech farmers from the United States and a handful of immigrants from the Austro-Hungarian Empire established several settlements in southeastern Saskatchewan and Alberta. European Czechs often settled near Slovakian and Hungarian communities. After 1910, a number of Czech Baptist communities were established in the Swan river valley of southern Manitoba. Prior to World War I, Winnipeg had the largest Czech urban population, though it remained small. According to the census of 1911, there were only 1,800 Czechs in Canada. While these early Czech immigrants came mainly for economic opportunity, most after 1918 were admitted as refugees as a result of various political crises. During the 1920s, the newly created state of Czechoslovakia had a strong economy and a relatively stable political system, thus discouraging immigration. The small number of Czechs who did come to Canada tended to be urban workers and overwhelmingly flocked to Montreal and southern Ontario. The number of immigrants declined to less than 100 annually during the 1930s and stopped almost altogether following the partition and occupation of Czechoslovakia in 1937–38. Thousands of Czechs displaced by World War II and the Communist takeover of 1948 fled to refugee camps in Germany and Austria. Between 1948 and 1952, about 10,000 Czechoslovaks immigrated to Canada; probably about half were Czechs. Immigration remained small until the Soviet Union’s brutal suppression of the Prague uprising of August 1968, leading Canada to admit about 12,000 refugees, a third of whom were professionals or skilled trade workers. Of Canada’s 29,310 Czech or Czechoslovakian immigrants in 2001, only 3,225 arrived between 1991 and 2001.