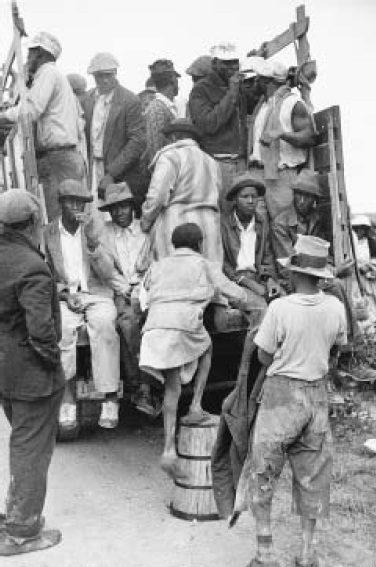 African-American farmworkers in the 1930s board a truck near Homestead, Florida.The enslavement of millions of Africans between the 1660s and the 1860s led to the creation of a highly segregated society in the United States, still persistent at the start of the 21st century. (Library of Congress, Prints & Photographs Division)

In response to the Enlightenment ideals of natural rights and political liberty and the evangelical concern for humanitarianism and Christian justice, between 1777 and 1804 the northern states gradually abolished slavery. The slave trade was banned by Britain in 1807, and slavery abolished throughout the empire in 1833. The slave trade was prohibited in the United States in 1808, but the invention of the cotton gin in 1793 and the rise of the short-staple cotton industry reinvigorated Southern reliance on slave labor at the same time that the antislavery movement was growing in strength. It is estimated that after the abolition of the slave trade, more than 500,000 slaves were sold from farms and plantations in Virginia, Maryland, Kentucky, and other states to the cotton plantations of the Deep South, with little regard for the preservation of slave families. As a result, when President Abraham Lincoln freed slaves under Southern control in 1863 and slavery was abolished in 1865, many African Americans not only came from a legacy of forced enslavement but had also been uprooted themselves.
See also racial and ethnic categories; RACISM.