Coming to the Hudson River Valley of New York as early as 1614, the Dutch were among the earliest European settlers in the New World and exerted considerable political and economic influence in New York well into the 19th century. Their descendants formed the first significant migration to Canada as part of the Loyalist evacuation during and after the American Revolution (1775–83, see American Revolution and immigration). In the U.S. census of 2000 and the Canadian census of 2001, 4,542,494 Americans and 923,310 Canadians claimed Dutch descent. As the earliest area of Dutch settlement (1621), New Amsterdam, later New York City (see New York, New York), remained their cultural center. The earliest Dutch Canadians settled in Nova Scotia and New Brunswick, though later immigrants concentrated in Toronto, Ontario, and Vancouver, British Columbia.
The Netherlands occupies 13,100 square miles of northwestern Europe along the North Sea between 51 and 54 degrees north latitude. Germany lies to the east and Belgium to the south. The land is flat and barely above sea level. An extensive network of dikes is utilized to reclaim and protect lowlying farmland. Netherland dependencies include several Caribbean islands known as the Netherlands Antilles and Aruba. The population of the Netherlands, estimated at 15,981,472 in 2002, is highly urbanized. Thirty-four percent of the people identify themselves as Roman Catholic and 25 percent as Protestant. Julius Caesar first conquered the region, which was originally inhabited by Celtic and Germanic tribes. After the collapse of Charlemagne’s empire in the ninth century, northwestern Europe entered into an era of regional nobilities. During the 14th century the region fell under the control of the dukes of Burgundy and in the early 16th century became part of the Spanish Habsburg empire. In 1579, a confederation of lowland provinces was formed, leading to a declaration of Netherlander independence in 1581. During the 17th century, the Dutch republic rose to imperial, economic, and cultural renown, establishing colonies in North America (New Netherland), South America (Suriname and an area of Brazil), the Caribbean, South Africa, India and Ceylon (present-day Sri Lanka), and the East Indies. Its merchant fleet was the largest in Europe. In 1795, the Netherlands became part of the French Batavian Republic. In the settlement of the Napoleonic Wars (1803–15), diplomats at the Congress of Vienna combined Belgium and the Netherlands as a brake against future French expansion. Belgium, Frenchspeaking and Catholic, seceded in 1830. Despite neutrality during World War II (1939–45), the Netherlands was occupied by Germany from 1940 to 1945. In 1949, following years of fighting, the Netherlands granted colonial Indonesia its independence. Irian Jaya was ceded in 1963. Since World War II, immigration to the Netherlands from its former imperial colonies has reshaped the ethnic composition of the Dutch population.
Dutch immigration to North America occurred in three stages. The earliest, from 1614 to 1664, centered on the commercial venture of the New Netherland colony. Fort Nassau (later Albany) was founded in 1614, and the region was later developed by the Dutch West India Company. New Netherland was never very attractive to Dutch commercialists, however. By 1664, when England wrested control of the region from the Netherlands, the population of the colony was less than 10,000, and only 70 percent of these were Dutch. Although immigration from the Netherlands almost totally ceased, by the first U.S. census in 1790, the Dutch population was estimated at 100,000, testimony to the high rate of natural increase among all Americans.
In the pioneer, or “free,” stage of immigration between 1820 and 1914, some 200,000 Dutch migrated to America, most of them peasants and artisans. Low mortality rates and high fertility fueled a rapid rise in population. Dutch citizens suffered from other problems common to most European countries of the period, including high taxes and widespread government regulations. The Holland Land Company offered land for sale in America, principally in New York State, but during the first four decades of the 19th century, only a few dozen Dutch emigrated annually. Evaluating the raw numbers is difficult because there were significant numbers of Belgian and German workers in Holland. Legal actions taken against pietistic Calvinists after their secession from the national church in 1834, and the effects of potato blight in the mid-1840s led to increased group immigration, with most representing the lower middle classes, including farmers and artisans. Between 1840 and 1940, emigration was about 250,000, considerably smaller than emigration from comparable countries like Sweden. Though the Dutch economy was often weak, emigrants frequently chose to settle in Dutch colonies in the East and West Indies. Nevertheless, by the mid-1840s, a small but steady stream of mainly Orthodox Calvinists began to concentrate in Michigan, Iowa, Wisconsin, and Illinois. The famine year of 1847 saw 8,090 Dutch migrate (from a population of just more than 3 million), a rate of migration that would never again be approached. Often congregations followed a pastor or other recognized leader. 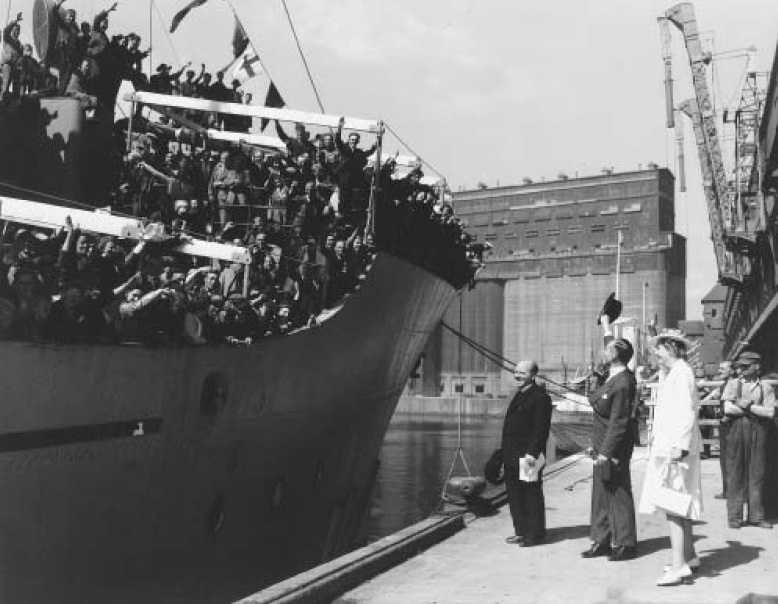 Netherlands ambassador J. H. van Roijin and his wife greet Dutch immigrants arriving by ship in Montreal, June 1947.Thousands of Dutch agriculturalists immigrated to Canada after World War II as part of the Netherlands Farm Families Movement, a program jointly sponsored by the Canadian and Dutch governments. (Photo by George Hunter/National Archives of Canada)
During the 1860s, the pattern of Dutch migration shifted from smaller groups to a mass movement, facilitated by the development of railways and other systems of transportation. Throughout the 1870s, Dutch immigration to the United States averaged about 1,000 per year. As grain prices dropped worldwide from the late 1870s and industrial crops such as madder and colza (rape) became obsolete, the Dutch compensated by concentrating on labor-intensive fruits, vegetables, and flowers, and the use of artificial fertilizers in order to stave off agricultural crisis. Although emigration prior to World War I (1914–18) never reached the proportions of other countries in western Europe, a vigorous campaign by dissident religious groups, business companies, transportation companies, and governmental agencies led to increased migration that peaked in 1882 when 9,517 immigrated to the United States. Rates of migration remained relatively high between 1907 and 1913 (averaging 119 per 100,000).
Only in the 1890s were the first significant agricultural settlements established in Canada, mostly in Saskatchewan and Alberta as cheap land became more difficult to find in the United States. Although the Dutch population in Canada was about 30,000 in 1871, most were Canadian born. Numbers thereafter grew gradually, to about 56,000 in 1911. As U.S. immigration policy became more restrictive in the 1920s, Dutch agriculturalists increasingly turned to Canada, settling mainly in Ontario. The Dutch immigration was unusual in its exceptionally low rate of return migration (less than 5 percent before 1890) and its high rate of single-stage migration to an intended destination (near 70 percent).
The third stage of Dutch immigration came between 1945 and the early 1960s, when the devastation of World War II (1939–45) caused severe housing shortages and considerable economic dislocation, leading some 80,000 to immigrate to the United States. The Canadian government admitted some 5,000 Dutch refugees and 15,000 Dutch farmers under the Netherlands Farm Families Movement program, seeking to encourage settlement in rural areas. With the improvement of the Dutch economy in the 1960s, immigration decreased dramatically. Between 1991 and 2002, more than 15,000 Netherlanders immigrated to the United States.