The Ellis Island immigration station, located in New York harbor, was the entry point for three-quarters of American immigrants between its opening in 1892 and the implementation of the restrictive Johnson-Reed Act of 1924. Between 1892 and its closing in 1954, it was the introduction to America for more than 12 million immigrants. It became for most European immigrants a symbol of American opportunity for a better life during an era of almost unrestricted European immigration. In 1932, the Ellis Island station stopped receiving steerage-class immigrants and finally closed in 1954. It was reopened in 1990 as the National Immigration Museum, part of the Statue of Liberty National Monument.
Beginning in 1855, immigrants were processed through the Castle Garden station at the southern tip of Manhattan Island. As the volume of immigration increased dramatically in the 1870s and 1880s, however, it became clear that it would no longer be adequate for processing hundreds of thousands of immigrants each year. Almost 5 million were processed during the 1880s alone. The problem was made worse when New York State officials threatened to close Castle Garden unless the federal government agreed to fund its operations, which was done in 1882 by levying a head tax of 50¢ on every immigrant, gradually raised to $8 by 1917. New federal guidelines in 1890 requiring more extensive physical and mental examinations, combined with the massive influx of immigrants, finally led the federal government to establish a new immigrant depot, this time on Ellis Island. While it was being constructed, between 1890 and 1892, immigrants were processed in a wholly inadequate federal barge office.
Ellis Island was named for its last private owner, Samuel Ellis, who purchased it in the 1770s. The site chosen for the facilities had formerly housed a naval arsenal, Fort Gibson. The new structure was designed to process up to 5,000 immigrants per day. The building of the facilities was accompanied by the creation of a new bureaucracy. In 1891, the office of superintendent of immigration was created, ending the uneasy and ill-defined collaboration between the federal government and state boards and commissions, and finally providing the United States—one century and 16 million immigrants later—with a formal framework for addressing immigrant concerns. In a day when immigrants were welcomed by politicians and policy makers as cheap labor for developing the economy, the process at Ellis Island was meant to help immigrants into the country. Examinations tended to be brief, unless someone displayed obvious deformities or illness. Most immigrants passed through the facilities on the day they arrived, and the rejection rate for most of its history was about 1 percent. Immigration officials were nevertheless charged with screening “any convict, lunatic, idiot” or “paupers or persons likely to become a public charge,” the latter known as the LPC clause. Contract laborers were also prohibited after passage of the ALIEN LABOR ACT (Foran Act) of 1885, and about 1,000 aliens were denied entrance each year between 1892 and 1907 on these grounds.
The first structures on Ellis Island were nothing like the substantial and familiar Main Building—now housing the National Immigration Museum—that immigrants recall in their memoirs. Instead, they were all built of Georgia pine and were opened for business on January 1, 1892. On June 14, 1897, a fire destroyed virtually everything, including many immigration records dating back to 1855. Before rebuilding, the government stipulated that the new structures had to be fireproof. The permanent reception center was opened in 1900, though it soon proved to be inadequate.
During the first year of operation, in 1892, about 446,000 immigrants landed in New York, but numbers declined significantly through the 1890s, averaging about 231,000 per year between 1893 and 1899. Much to the surprise of many officials, however, immigration through New York increased dramatically after 1898. From about 179,000 arrivals in 1898, the immigrant flow peaked in 1906–07, when almost 1.9 million landed in New York. In 1913–14, another almost 1.8 million immigrants were processed. As a result, new dormitories, hospitals, kitchens, and other structures were built or expanded between 1900 and 1915.
When an immigrant ship arrived in New York harbor, first- and second-class passengers were given a cursory examination on board and were then transferred to shore. Most only saw the Ellis Island facilities from a distance or actually went there if some question had been raised on board. Steerage, or third-class, passengers were examined more carefully, for they were, in the minds of immigration officials, far more likely to become public charges. After traveling in crowded and rank conditions on the bottom decks of steamships for up to two weeks, immigrants would gather their belongings to be ferried to Ellis Island. Most immigrants were given a cursory medical examination—the “six second physical,” as it came to be called—and had their papers checked against shipping manifests. They were then briefly interviewed, as immigration officials worked from the ship’s manifest log that contained the answers to 29 questions previously completed by the immigrant. The whole process typically took three to five hours. Those admitted typically purchased rail or coastal steamer tickets to their final destinations and were then ferried to either Manhattan or the Jersey shore. The small number refused entry were detained pending an appeal or deportation.
With the massive influx of “new immigrants,” mainly from southern and eastern Europe (see new immigration), in the first decade of the 20th century, many Americans were skeptical about the policy of relatively unrestricted immigration. Nevertheless, most immigrants were treated fairly, if perfunctorily, and many officials took a genuine interest in their welfare. Long before he became mayor of New York City (1934–45), Fiorello La Guardia championed the immigrant cause, working as an interpreter at Ellis Island (1907–10). 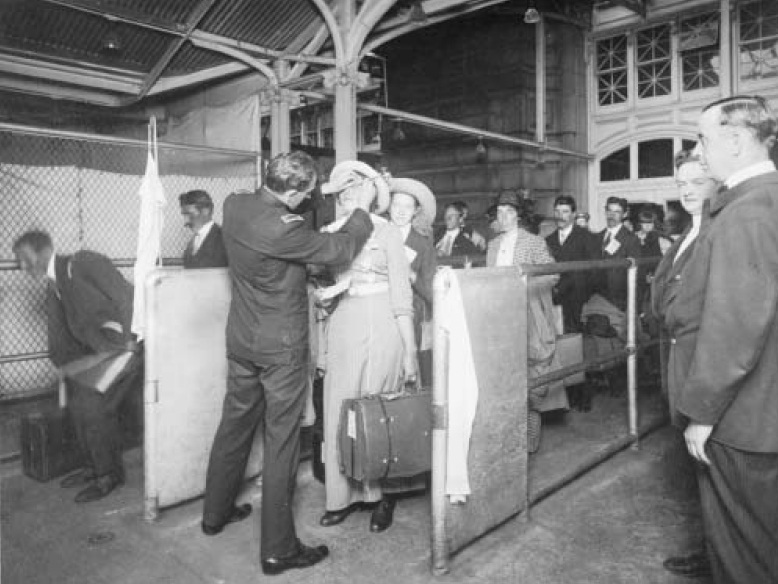 An inspector performs the required eye examination for the highly contagious trachoma at Ellis Island. Rigorous medical examinations and hygienic regimens were imposed on immigrants in both European and U.S. ports. (National Archives)
After World War I (1914–18), American consulates were established around the world and were responsible for issuing visas and checking credentials, thus lessening the work at the port of entry. Passage of the restrictive quota legislation of 1921 and 1924 (see Emergency Quota Act; JOHNSONREED ACT) also significantly reduced the number of immigrants allowed into the United States and marked the beginning of Ellis Island’s decline as a processing center. Whereas annual immigration averaged about 740,000 between 1903 and 1914, it dropped to about 152,000 between 1925 and 1930, and 30,000 during the Great Depression years of the 1930s. By that time, Ellis Island had become better known for detention than for entry and in 1932, finally stopped receiving steerage-class immigrants.
During World War II (1939–45), the Ellis Island facilities were used to house enemy merchant detainees and as a training ground for the U.S. Coast Guard. They were finally closed in 1954. In 1965, the area was incorporated with the Statue of Liberty National Monument and opened to the public on a limited basis. After the largest historic restoration in U.S. history, beginning in 1984 and costing $160 million, the Main Building was opened to the public in 1990 as the Ellis Island Immigration Museum. The museum traces the role that Ellis Island played in the lives of millions of immigrants, placing it in the context of the broader patterns of immigration to the United States. A variety of exhibits, many including personal testimonies in video and interactive displays, cover more than 40,000 square feet of floor space. Included in the museum’s collections are oral histories from some 2,000 immigrants, the result of the Ellis Island Oral History Program, which is housed there. There is also a research library with special collections on the Statue of Liberty, immigration, ethnic groups, and Ellis Island itself.
The list of famous Americans who passed through Ellis Island is long, and includes individuals from every area of American culture. Here is a small sample: 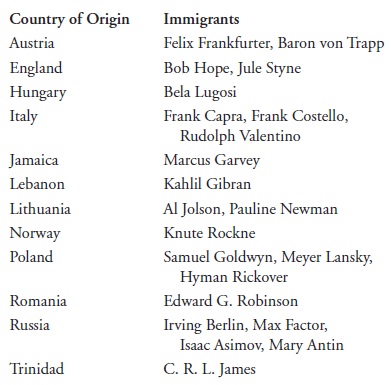