Entertainment in early 19th century North America was centered in the home. While the upper classes might attend opera, the theater, and the symphony; the middle class, minstrel shows or plays; and the working classes, saloon variety shows, most people were entertained at home by family and friends, and the development of amateur musical or theatrical talent was considered a mark of social grace. In rural areas and among the poor, folk music and dances developed. Immigrants of high artistic achievement usually represented in their performances the European elite culture routinely copied in America and Canada, playing in productions of Shakespeare or in classical symphonies. Popular immigrant entertainment was usually associated more narrowly with immigrant folk culture—German church hymns, Irish ballads, and local Ukrainian folk troupes, for example. Prior to the 20th century, the vast majority of immigrants were either unskilled or semiskilled laborers or agriculturalists, who wished to fondly remember their homelands in their entertainments. Sometimes these nostalgic longings developed into rich performance communities in the large cities, including an extensive repertoire of Yiddish-language adaptations of both classics of the stage and melodrama. Though most ethnic performers never joined the mainstream English stage, they nevertheless served large audiences. The first phase of immigrant entertainment then was self-consciously fashioned by performers for their own ethnic groups and had little impact on society at large. Immigrants themselves were scarcely included in the songs and plays of the mainstream culture, and when they were, it was usually as a stereotype, such as the drunken Irishman or the Jewish shylock. It usually took immigrants many years to acquire an understanding of American art forms; once they did, however, they played a powerful role in defining the cultural landscape.
Two closely related developments in the entertainment industry at the end of the 19th century opened doors for many immigrants. The rapid growth of cities during the Industrial Revolution, particularly after 1880, led to the creation of a variety of venues that were an extension of the British music hall and designed specifically for mass popular entertainment, thus marking the beginnings of American vaudeville. In the 1890s, the music publishing industry was transformed by the deliberate search for composers and lyricists to supply the new mass market. Tin Pan Alley, the collective name given to the New York music publishing district, was constantly searching for clever lyrics and great tunes and was willing to take on anyone who could write to meet a popular style. Together, vaudeville and Tin Pan Alley ushered in a new age of mass entertainment. 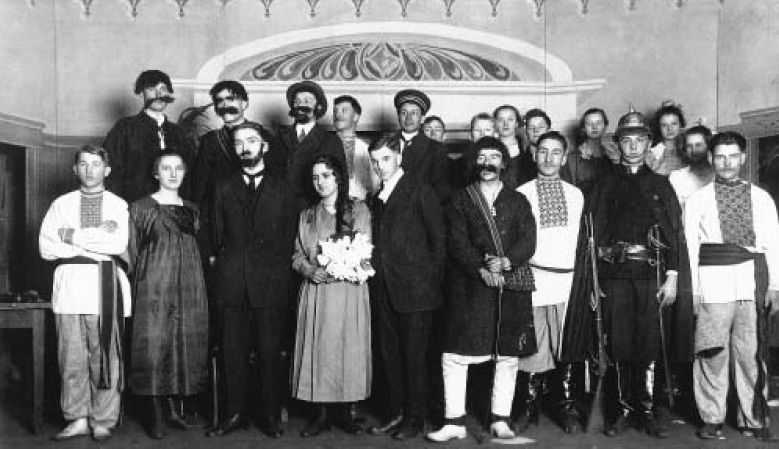