Estonian immigration to North America has been small and closely tied to political events in Europe. In the U.S. census of 2000 and the Canadian census of 2001, 25,034 Americans and 22,085 Canadians claimed Estonian descent. Early settlement in the United States included in New York City, San Francisco, and Astoria, Oregon. In 2000, most Estonians in the United States lived in the Northeast, with a significant number also in California. Toronto was the center of Estonian settlement in Canada.
Estonia occupies 17,400 square miles of eastern Europe along the Baltic Sea and the Gulf of Finland between 57 and 59 degrees north latitude. Russia lies to the east and Latvia to the south. In 2002, the population was estimated at 1,423,316, 65 percent of which are ethnic Estonians. Russians made up another 28 percent of the population. Chief religions of the country were Evangelical Lutheranism and Russian Orthodox. Prior to World War I (1914–18) Estonia was a province of the Russian Empire. As such, it is impossible to determine how many Estonians immigrated prior to 1922 because they were almost universally referred to as Russians, representing the country of their birth. A few Estonians were among the Swedish party that settled the colony of New Sweden along the Delaware River during the 17th century (see Delaware colony), and small groups settled near Pierre, South Dakota; New York City; and San Francisco after 1894. It was not until the failed socialist Revolution of 1905, however, that the first large group of Estonians came to the United States, many of them committed Socialists. With the independence of Estonia in 1920 and passage of the restrictive Emergency Quota Act (1921) and Johnson-Reed Act (1924), Estonian immigration declined significantly. Estonia was conquered by the Soviet Union in 1940 and incorporated as a Soviet Socialist Republic, driving thousands of refugees into displaced persons camps in Germany after World War II (1939–45). Between 1946 and 1955 more than 15,000 were accepted in the United States as refugees. Under Soviet rule, Estonians generally were not allowed to emigrate, but upon gaining their independence in 1991, it became more common. Between 1992 and 2002, about 2,500 Estonians immigrated to the United States. 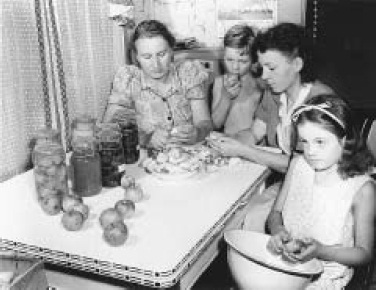 An Estonian family near Jewett City, Connecticut, 1942. A failed revolution in Russia in 1905 led to the first major wave of Estonian immigration to the United States. (Photo by John Collier/Library of Congress, Prints & Photographs Division)
Only a handful of Estonians, mainly individuals and a few families, settled in Canada prior to World War II. The earliest Estonians were probably fishermen working out of Prince Rupert, British Columbia. Between 1899 and 1903, there were 16 Estonian farms near Sylvan Lake (modern Alberta). By 1916, there were about 1,500 Estonians in Canada. Only 700 immigrated during the 1920s and 1930s, including members of a failed settlement near St. Francis, British Columbia. After World War II, Canada admitted about 14,000 Estonian refugees, most between 1947 and 1951, and often after they had first made stops in Sweden or Germany. Of 6,395 Estonians in Canada in 2001, almost 80 percent arrived prior to 1961; only 845 immigrated between 1991 and 2001. Most Estonians who immigrated to the United States and Canada as refugees were well educated and staunchly anticommunist and tended to assimilate quickly.
See also Russian immigration; Soviet immigration.