Recognized as the leading anti-immigration group in the United States, the Federation for American Immigration Reform (FAIR) has received support from numerous celebrities and politicians and claims membership from both conservative and liberal party supporters, whose donations make possible the high visibility FAIR receives through its many advertising campaigns.

The Fedorenko decision established that the citizenship of a naturalized citizen may be revoked in cases when individuals intentionally provided false information to enter the country or to obtain materialization.

The Fenians began a secular nationalistic revolutionary tradition in Ireland that aimed at freeing Ireland from British control.

An extension of another piece of post-World War II legislation, the War Brides Act of 1945, the Fiancées Act granted the fiancés of American servicemen a special exemption from previously established immigration quotas that allowed them to enter the United States.

Filipino American newspapers and magazines have featured stories not only about Filipinos living in the United States but also about events of interest in the Philippines, demonstrating the desire among many Filipino Americans to stay connected with their ancestral homeland.

Significance: During the late twentieth century, Filipinos became one of the fastestgrowing immigrant populations in the United States. By the early twenty-first century, they constituted the third-largest Asian immigrant group in the United States, after Asian Indians and Chinese, and could be found living throughout the North American continent. 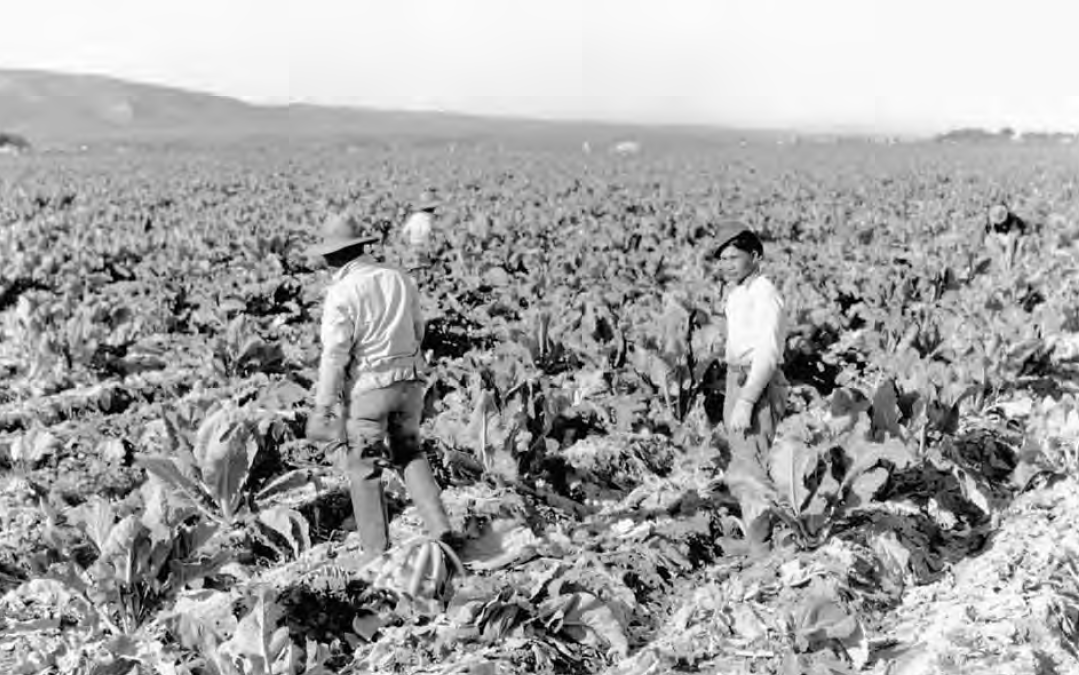 Filipino farmworkers in California during the 1930’s. (Library of Congress)

Although most immigration from the Philippines to the United States occurred during the twentieth century, the earliest identifiable Filipino immigrants arrived in America during the 1830’s.At that time, hunters and trappers of Filipino origin settled in the region of Louisiana below New Orleans, which was then the busiest port in the United States after New York City. At that time, the Philippine Islands were a Spanish colony, and these first Filipino immigrants appear to have reached New Orleans on Spanish ships. As late as the 1930’s, descendants of these early Filipino immigrants, popularly known as "Manila men,” maintained a settlement along the mouth of the Mississippi River and supported themselves by shrimping, fur-trapping, and fishing.

American Involvement in the Philippines

During the decade following the arrival of the first pensionados, Filipino immigration to the United States increased dramatically. The Filipino American population increased from fewer than 3,000 persons in 1910 to more than 26,000 in 1920 and more than 100,000 in 1930. These new immigrants were drawn to America primarily by the demand for labor.

During the early twentieth century, American industry grew rapidly and agriculture increasingly became a large-scale enterprise, requiring growing numbers of hired workers. Farming became more regionally specialized as advances in refrigeration and transportation made it practical to grow fruits and vegetables on large regional farms for export to distant parts of the United States. To meet the need for labor, farmers in California and canning factories in Alaska began recruiting Filipino workers. In 1920, the West Coast of the United States alone was home to an estimated 5,600 Filipinos. By 1930, this number had grown to 45,372. Filipino migrant workers provided much of the seasonal labor for fruit and vegetable farms in California, Oregon, and Washington, where they harvested asparagus, grapes, strawberries, carrots, lettuce, potatoes, and beets.

Hawaii, then an American territory, was the destination for many Filipino agricultural workers. American sugarcane planters in Hawaii rapidly expanded their exports during the first decade of the twentieth century and needed workers for the fields. In 1906, A. F. Judd, an attorney representing the Hawaii Sugar Planters Association (HSPA) arrived in the Philippines to recruit workers for the sugarcane fields and to make the legal arrangements to bring them to Hawaii. However, relatively few agricultural workers left the Philippines forHawaii until 1909. During that year, unrest among the Japanese, who until then had made up the majority of laborers in the Hawaiian sugarcane fields, prompted plantation owners and managers to increase their recruiting efforts among Filipinos. When Japanese plantation workers went on strike, Hawaiian planters concluded that they needed a new and more easily controlled labor source.

The peoples of the Philippines speak many different languages, although there are a few widely spoken major languages, such as Tagalog, Ilocano, and several closely related dialects of Visayan. The linguistic diversity among the Filipino immigrants helped the Hawaii planters to avoid the labor problems they had experienced with the linguistically homogeneous Japanese. By being careful to recruit workers from different regions of the Philippines, they limited communication among Filipino field-workers. Between 1909 and 1914, about 4,000 Filipinos made the voyage from the Philippines to Hawaii each year. Their numbers decreased after 1915, when the Philippine legislature passed laws regulating the recruitment and treatment of Filipino workers. The numbers picked up again during the 1920’s, however. By 1925, around half of all plantation workers in Hawaii were Filipinos. By the early 1930’s, Filipinos made up about three-fourths of all Hawaii plantation workers.

After World War II, the United States recognized the full independence of the Philippines. However, the U.S. government still maintained a presence in the Philippines that contributed to new forms of migration. In 1946, the U.S. Congress passed the Luce-Celler Bill, which increased the Philippines’ immigration quota from fifty to one hundred persons per year. Spouses of U.S. citizens were not counted within this quota, however, and they became a major part of Filipino immigration. Meanwhile, the United States retained large military bases in the Philippines, ensuring an ongoing presence of large numbers of mostly male American military personnel, some of whom interacted socially with Filipino women. Many Filipino- American marriages resulted from these contacts. Between 1946 and 1965, as many as one-half of all immigrants from the Philippines arriving in the United States were wives of U.S. servicemen.

In 1948, the U.S. Congress passed the Education Exchange Act, another piece of legislation that promoted the immigration of a new category of Filipinos who would join the growing Filipino American population. The 1948 law enabled foreign nurses to spend two years in the United States for study and professional experience. Differences between American and Filipino living standards lured many Filipino nurses to remain in the United States after they completed their training, and the large demand for nurses in the United States made it relatively easy for them to find work. 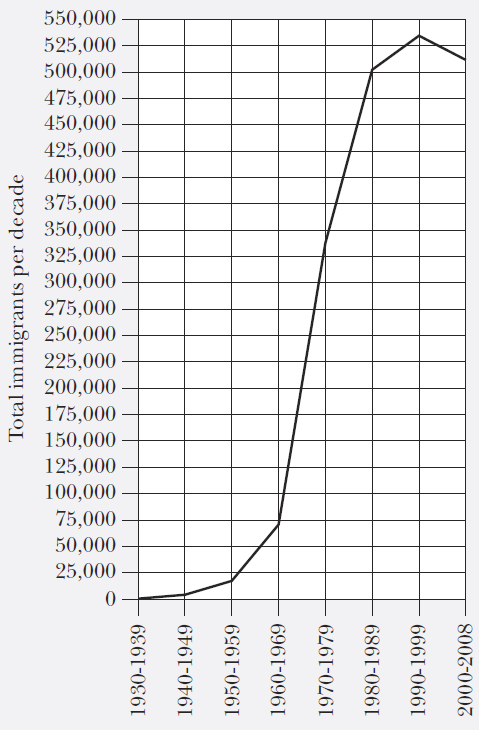 Source: Department of Homeland Security, Yearbook of Immigration Statistics, 2008. Figures include only immigrants who obtained legal permanent resident status. There are no data for Filipino immigration before 1930.

Many post-1965 immigrants from the Philippines were highly skilled professionals. Before 1960, fewer than 2 percent of the people of Filipino ancestry residing in the United States had professional occupations, compared to 6 percent of all Americans. By contrast, two decades later, about one-quarter of all Filipinos in the United States were professionals. By the twenty-first century, this figure had risen to nearly one-third.

The United States had a particularly strong demand for medical workers that Filipinos could supply because the American occupation of the Philippines had established American training and standards in the islands. As a consequence, nurses, physicians, medical technicians, and other medical professionals were heavily overrepresented among the occupational fields of Filipino immigrants to the United States.

During the 1960’s, the American military presence in the Philippines continued and even grew along with American involvement in the Vietnam War. By 1980, one quarter of all married Filipino American women had husbands who had served in the U.S. military during the Vietnam War period. The popular identification of the Philippines as a source of wives also expanded into civilian American society, so that marriages arranged by mail between women in the Philippines and men in the United States were becoming common during the 1970’s. By the early 1990’s, an estimated 19,000 so-called mail-order brides were leaving the Philippines each year to join husbands and fiancés abroad, with the United States their primary destination.

As the Filipino American population increased, a growing number of residents of the United States had immediate relatives in the Philippines. Because the 1965 change in immigration law had made family reunification the category that allowed the most immigrants, this meant that each new immigrant opened the way for others. The result was an exponential growth in the Filipino American population throughout the last decades of the twentieth century and the first decade of the twenty-first century. In 2007, the U.S. Census Bureau estimated that 2.5 million people of Filipino descent were living in the United States, ranking Filipino Americans only slightly behind Asian Indian Americans and a little further behind Chinese Americans.

In 2007, more than 72,500 people from the Philippines were admitted to legal permanent residence in the United States, and nearly 39,000 people born in the Philippines became naturalized U.S. citizens. By this time, Filipino Americans were living in communities across the United States, but the single largest concentration could be found in California’s Los Angeles-Long Beach-Santa Ana metropolitan area, in which an estimated 380,000 Filipinos resided in 2007.

Bulosan, Carlos. American Is in the Heart: A Personal History. 1946. Reprint. Seattle: University of Washington Press, 1974. Memoir of perhaps the best-known Filipino American writer, who came to the United States as an immigrant fieldworker during the 1930’s.

Espiritu, Yen Le. Homebound: Filipino American Lives Across Cultures, Communities, and Cultures. Berkeley: University of California Press, 2003. Study of how Filipino immigrants have adapted to American culture and society built around interviews with more than one hundred Filipino Americans.

Karnow, Stanley. In Our Image: America’s Empire in the Philippines. New York: Random House, 1989. History of the American conquest and occupation of the Philippines and efforts to impose American culture and institutions on the island nation.

Okamura, Jonathan Y. Imagining the Filipino American Diaspora: Transnational Relations, Identities, and Communities. New York: Garland, 1998. Exploration of Filipino immigration that examines the subject in the context of Filipino emigration to more than 130 countries around the world.

This federal law provided free transportation for Filipino residents of the continental United States who wished to return home but could not afford to do so.

Father Flanagan was an early and vocal advocate of child-care reform whose experiences as a Roman Catholic parish priest among the impoverished immigrants in Omaha, Nebraska, convinced him that addressing such catastrophic social conditions could only begin with taking in homeless boys and educating them.

Newcomers to Florida, from both other countries and other parts of the United States, have tended to settle in clusters, while maintaining their ethnic identities and their ties to their birthplaces.

Although the Florida lawsuit was eventually dismissed, the case was important because it represented the first time a state sued the federal government for costs associated with illegal immigrants.

Upholding a state law that discriminated against aliens, the Supreme Court in the Foley decision departed from a previous decision based on strict scrutiny, thereby making it much more likely that similar policies would be upheld.

Upholding the constitutionality of the Geary Act of 1892, the controversial Fong Yue Ting decision recognized that the U.S. Congress had almost unlimited discretion to establish all aspects of the nation’s immigration policy, including the rules and procedures for alien registration and deportation.

What people eat, when, and with whom—their “foodways”—are largely determined by their cultures. As circumstances allowed, immigrant groups brought their food preferences and eating customs with them to the United States, allowing them to maintain a sense of identity and cohesion.

In the absence of federal laws that discriminated against immigrants, the state of California sought to favor immigrants of European origin by enacting special taxes that targeted the state’s Mexican and Chinese miners.